How the Rep Was Won:

Peaking since ‘91: As part of our year-long celebration of 30 years, we're excited to kick off a series dedicated to how the Polartec brand was introduced to the world. In 1991, Polartec started a tradition that helped us tell our story by putting our brand, quite literally, to work with the inception of our Polartec Challenge Grants. 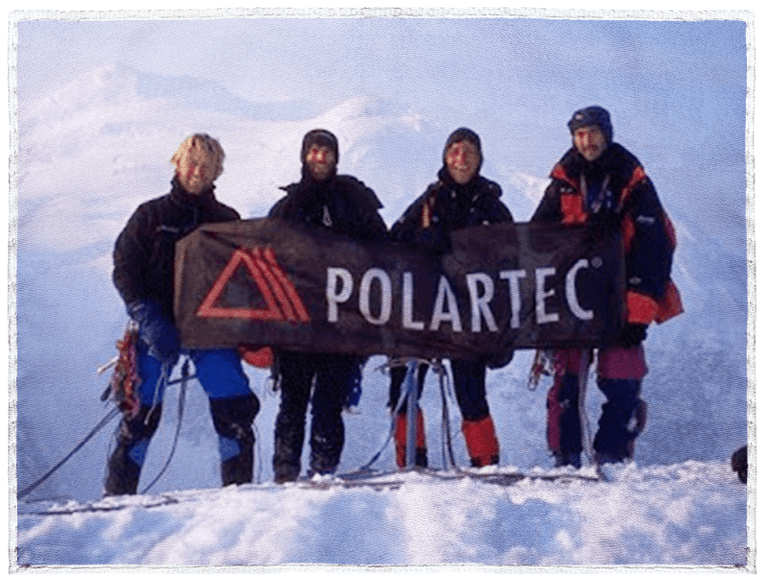 From 1991 to 2006, the Polartec Challenge Grants funded dozens of jaw-dropping adventures in remote locations, taking the world's most adventurous outdoor athletes — outfitted in gear initially handmade by then-Polartec Marketing Manager Ruthann Brown — on expeditions that defied gravity and local law while planting the Polartec banner in Pakistan, the Arctic Circle, and tons of far-out locations in between.

The grants started as a brand-building initiative in 1991. This year is critical as it marks the introduction of the Polartec brand. After ten years of marketing different iterations of a Polar system (PolarFleece/PolarPile/PolarLite/PolarSoft), we finally settled on the Polartec name and iconic Peaks as a single logo. By this time, our fleece was readily adopted by more and more outdoor enthusiasts, and uniting around a single mark just made sense. This new status didn’t go unnoticed by Malden Mills resident enthusiast and PR Director Jeanne Wallace, who saw the opportunity to further establish Polartec as an authentic outdoor brand.

Her first grant was to Ned Gillett and Suzy Patterson's expedition to travel the Silk Road. It was the success of this trip - through press and word of mouth - that pushed the team to make funding such treks as a way to integrate Polartec into the lives and language of the most cutting-edge outdoor athletes.

As Jeff Bowman, Malden Mills Director of Marketing, said, “the Polartec Challenge Grants were a way to earn some chops in the outdoor world... and move the perception of Malden Mills at the time as a bunch of 'garmentos' to a true outdoor company."

The grants also gave our well-connected marketing team a chance to give back to the sports and outdoor communities that were such an important part of their lives, both personally and professionally.

Next, the team assembled a “Challenge Advisory Board” representing experts in a range of outdoor sports, including skiing, technical rock climbing, mountaineering, and whitewater rafting. The group was a veritable who's-who of international adventurers, and their meetings have become the stuff of legends.

According to one board member, former whitewater kayaking champion and current mayor of Mosier, Oregon, Arlene Burns, the "United Nations of Adventure" knew every applicant and proposed destination among them, so they could immediately smell an imposter.

Board members from Japan, Australia, the United Kingdom, Germany, France, Italy, and the United States chose which trips would be funded with the $70,000 annual budget (approximately $140,000 in 2021 USD) while taking time to ski, kayak, and hike around incredible locations like Banff National Park or the Columbia River Gorge.

According to Ruthann, the team was pretty reluctant to advertise that they were sponsoring adventures.

"We wanted it to be very word-of-mouth — to give it authenticity, make it editorial, not advertorial," she says.

But among the adventurers in the know, Polartec quickly became a hot commodity.

"We knew it was a good thing for the brand," Ruthann muses, "You'd be at our trade show booth, and all the cool people were hanging out at our booth. All the famous adventurers were there, we had the good food, the good people."

You can imagine why the Challenge Grants won us favor in those circles — they truly empowered visionary explorers who may have otherwise not had the funding to accomplish their dreams. For instance, when professional climber and social entrepreneur Majka Burhardt lost funding for her team's climbing expedition to Namibia due to an economic downturn, we were able to save the day: "The Polartec Grant became really pivotal for us because it was the right amount of base funding that allowed us to still pull it off," Majka says.

Another grant recipient and renowned alpinist, sailor, and glaciologist, Alun Hubbard, perfectly summarized the spirit of the entire endeavor: "Polartec just gave us this lovely kit and some decent cash and said, 'Just ****ing go and try to come back alive with some good stories.' Like, how brilliant is that? It wasn't like, 'Oh, are you photogenic? What camera people do you have?' That's why I thought it was just so brilliant and beautiful and enabling. It's in the spirit of adventure for adventure's sake, not for any other means and motives."

In a time when even most day hikes are exhaustively documented, we're proud to continue promoting "adventure for adventure's sake" with this blog series that will finally tell the stories of the exciting endeavors of Polartec Challenge Grant winners.

It can be fairly said that in no small part, the Polartec Challenge Grants spurned a heyday for our brand and solidified Polartec as a real mover and shaker in the outdoor world.

Over the 10-plus years the grants were awarded, we sent outdoor legends like expedition climber Mike Libeski, technical climber Mick Fowler, sea kayaker Jon Turk, explorer Helen Thayer, mountaineers Alex Lowe and Anatoli Boukarev, and dozens more to breath-taking locations around the world. With this new blog series, we will share their stories and take you on the journeys made possible by Polartec.